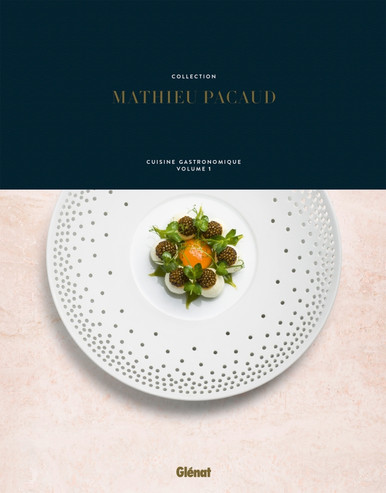 Mathieu Pacaud's massive, dazzling book marks a new turning point in the career of the chef and showcases a know-how that has been nourished by multiple experiences for more than 20 years.

After learning in his legendary family restaurant L'Ambroisie, Mathieu Pacaud, born in 1981, held all positions in the kitchen and then became chef alongside his father Bernard Pacaud in 2009.

Driven by the quest for excellence and the passion for French high gastronomy, Mathieu Pacaud is a bubbling artist who needs to create. He took off in 2015 and designed two restaurants Hexagon and Stories in Paris. He is immediately rewarded with a Michelin star for the first and two stars for the second. Still in turmoil, at the end of 2016, he took over the famous Divellec. He gave fresh blood to the restaurant's seafood cuisine and was rewarded with a Michelin star six months after the opening of the restaurant.

Along with his adventures in Paris, the chef revived his Corsican roots and created an exceptional Table de la Ferme for the summer months in the heart of the estate of Murtoli in Sartène in the island of Corsica, where again, a Michelin star was awarded.

In 2018, the Mathieu Pacaud group became the owner of a real institution: the Apicius restaurant. At the moment when the chef chooses to focus on this prestigious house, Collection Mathieu Pacaud appears as the culmination of a fantastic ride. This beautiful book of 816 pages is extracted from two years of reflection of the chef and his teams. A synthesis of talents that is expressed through 350 recipes presented alphabetically by which Mathieu Pacaud benefits us from his contemporary vision of gastronomy.