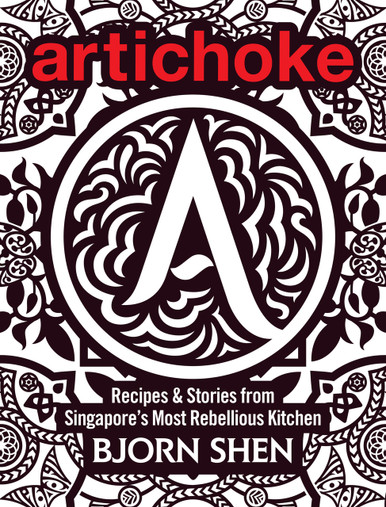 "When chefs stopped trying to figure people out and started cooking whatever the hell they wanted to."

Some might know Bjorn Shen as Singapore's most rebellious chef of that Middle Eastern-inspired restaurant called Artichoke.

But for those who don't, this book will get you acquainted with the gutsy Singaporean owner-chef in his first no-holds-barred cookbook-memoir. Chef Shen's recipes are interspersed with hilarious anecdotes, cooking accidents, tasteless jokes, masochistic behavior, epic staff meals, and ridiculous customer complaints. Unorthodox recipes abound from Middle Eastern-inflected basturma-cured tuna to borderline insane offerings of Oreo ‘pancakes’, bak chor mee sandwich, Mamee salad and a humongous lamb shoulder called, appropriately, The Lambgasm. This book is ideal for those who love reading about the culinary underbelly, those who want to know the pros and cons of venturing into the restaurant business, and those eager to try something different in the kitchen.

In Artichoke: Stories and Recipes from Singapore’s Most Rebellious Kitchen, Chef Shen reveals the scrappy stories and recklessly creative recipes behind his ‘deviant Middle Eastern’ enterprise with characteristic brutal honesty. The book, which also features over 90 recipes including Arabian staples such as green chilli harissa, yoghurt flatbread, labneh and more, is written in a casual, approachable style. What you get is 272 pages filled not just with recipes of his awesomely creative dishes but also the story of how Artichoke came to be. Plus everything else in between. Told in his distinctive style, Chef Shen also spills the beans on the nitty-gritty of running an F&B establishment which makes for an informative read.

Sitemap | All prices are in USD Copyright 2021 Le Sanctuaire.