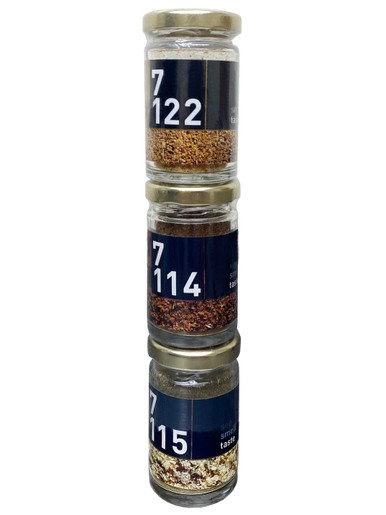 Shichimi Togarashi
Shichimi Togarashi, the Japanese “seven-spice blend” largely credited to a Tokyo spice shop dating back to the 17th century, combines sansho pepper and dried red chilies with other key ingredients. Our special chukara – or medium-heat – blend rounds out the dominant flavors of sansho pepper and chilies with ingredients such as fragrant dried orange peel. This piquant, peppery mixture is excellent with soups and noodle dishes as well as grilled meats.

Chinese Five Spice
Chinese five-spice (wu xiang fen) is a mixture of wild black pepper, cassia, clove, fennel seed and star anise. Referred to as the Chinese bouquet garni, its combination of seasonings reflects the balance of yin and yang and five basic flavors in Chinese cooking: sweet, sour, bitter, hot and salty. Our Chinese Five-Spice is a deep brown-red powder with a sweetly pungent fragrance, predominantly from star anise. It’s spicy and tangy; use sparingly.

Japanese Curry
Curry became popular in Japan in the early 20th century. The Japanese navy adopted British curry to their taste by first thickening it then adding carrots, onions and potatoes for sweetness. Unlike Indian curry, Japanese Curry is not spicy. Each prefecture has its own curry style with its protein preference. We want get as close as possible to the true Japanese curry dish: warm, hearty and sweet.