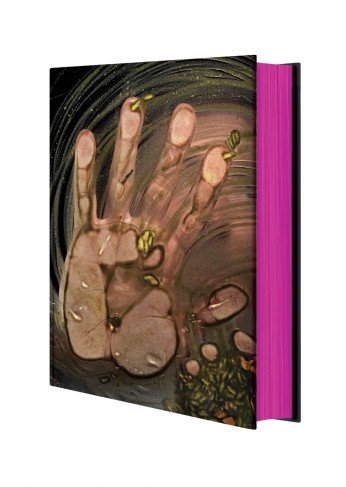 At Le Calandre, their three-Michelin star restaurant outside Padua, Italy, Massimiliano and Raffaele Alajmo have forged a reputation for a cuisine that is technically innovative but remains nonetheless emphatically Italian. Massimiliano Alajmo is known worldwide when he gained three Michelin stars at only 28 years old, becoming the youngest Chef in the World to receive such high recognition. The only book of its kind, Fluidità is the natural continuation of a journey that the Alajmo brothers began in their first book, In.gredienti. This follow-up to their imposing, sensational In.gredienti is even longer, with still denser text and images. It seeks to engage users more deeply, employing dramatic photography to underscore the theme of the fluidity of connections between ingredients. Many—but not all—dishes are photographed as if seen partially or fully underwater. The cuisine itself is striking and never strays far from its Italian roots. The object is enormous, it transports you, makes you dream, and even if you never cross paths with Alajmo’s cuisine, the book holds its own, as a magnificent culinary tale to be devoured with the eyes. Dramatic!

568 pages, 425 photos, 70 recipes and “re-readings.” Color photographs (in digital) by Sergio Coimbra, black and white (in analog) by Wowe. In English.

Fluidità: behind the scenes of the Alajmo brothers second book (03:07)