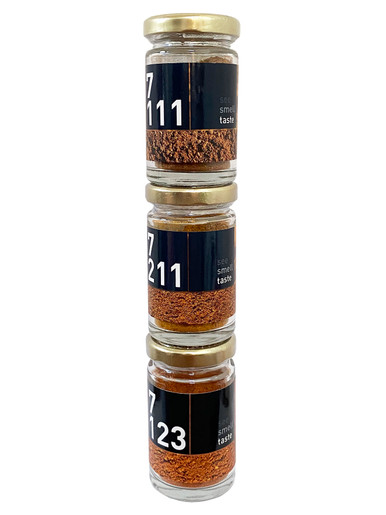 Garam Masala
Garam Masala means “hot spice” in Hindi, less for its capsaicin content than for the spice mixture’s intensity. The formula varies from region to region (or even family to family) in South Asia but includes cloves, cinnamon, cardamom and black peppercorns. Ours has a pronounced cardamom note to add brightness. It lends complex nuances to dry rubs and marinades. Sprinkled as a garnish, just a pinch will contribute tremendous fragrance and flavor.

Tandoori Masala
Tandoori seasoning is a fragrant, savory spice mixture used to flavor meats traditionally cooked in a tandoor, the high-heat clay oven of north Indian, Pakistani and Afghan cuisines. The mix of spices varies from region to region, including garam masala, garlic, ginger, cumin and cayenne pepper, ground with a pestle and mortar and sometimes combined with lemon juice or yogurt. Our distinct Tandoori Masala mix is redolent of cumin and slightly pungent with mace.

Vindaloo Curry
This fiery Indian spice mix originates from coastal Goa but has its roots in a Portuguese dish called “vinho d’alho,” imported by seafaring traders in the 16th century. The Portuguese name refers to the wine and garlic in the original recipe, but the intense Indian Vindaloo incorporates potent chilies and pungent spices. Often used as a marinade for pork cooked with wine, vinegar, garlic and fresh ginger, it’s equally tasty with chicken and lamb.