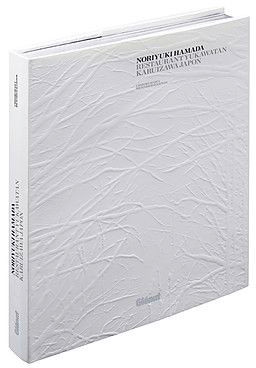 THIS BOOK IS OUT OF PRINT. VERY LIMITED SUPPLY.

An aesthetic emotion, a gustatory upheaval, a cultural shock. The cuisine of Noriyuki Hamada, chef of the restaurant Yukawatan in Japan, is a gastronomic revelation imposing itself in 352 pages of splendor.

With hair tied in a bun like an ancient samurai, Noriyuki Hamada is the head of the Yukawatan restaurant in Karuizawa, a town in Nagano Prefecture, in the mountains of the main island of the Japanese archipelago. Bronze winner of the Bocuse d'Or 2013 and the first Japanese winner of world championships of cooking in which Japan has participated for more than 25 years, he embodies a new culinary era. Reciprocal fascination and influence link the French and Japanese gastronomy: the recipes of Noriyuki Hamada are an impressive and exciting demonstration.

Without speaking a word of French (or even of English), Chef Hamada mastered like nobody the techniques of Escoffier and the products of the classic French kitchen. With a dish of meat - "The Book of Nature" - he stunned the international jury of the Bocuse d'Or, and some of the most rigorous chefs, such as Régis Marcon, Pascal Barbot and Philippe Mille, hailed his mastery and personality.

Noriyuki Hamada applies his virtuosity to showcase products of a nature that inspires him: that of the Shinshu region. He combines Western cooking methods and Japanese preparation techniques to create amazing recipes. This "mutant" of cooking knows how to do everything, but he expresses himself with an incomparable identity.

It is through this oversized book that Chef Hamada and the Hotel Bleston Court, where the restaurant Yukawatan nestles, have chosen to conquer France. Nobody better than Chihiro Masui, a Japanese author living in France and an expert in international haute cuisine, could testify to the revelation of Noriyuki Hamada's cuisine. Together, they elaborated in a grand book expressing the five flavors of cooking, the five foundations of taste: salty, sweet, sour, bitter and umami, which name simply expresses the "taste that is good."

Bleston Court Yukawatan, by Noriyuki Hamada, Japan (02:54)
Chef Hamada will be autographing his new book next Thursday, on the 27th of November starting at 3:30 pm, at the Librairie Gourmande in Paris.