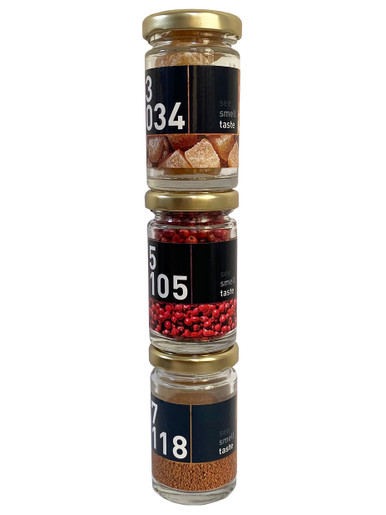 Crystallized Ginger
Our Crystallized Ginger is made with organic young ginger from an area of China’s Fujian region where the sun and temperatures are optimal for its growth cycle — picked after only 5 months when it is still tender and mild. The moisture in the ginger is replaced by sugar syrup during a days-long cooking process in steeping kettles. It is then rolled in sugar and cured in humidity-controlled rooms to produce this traditional European-style sweetmeat.

Pink Pepper
These highest-grade Pink Peppercorns are grown in Brazil, carefully harvested by hand during the month of May. Not true peppercorns, they are the dried berries of the Brazilian pepper tree. After cleaning and sorting, only the brightest-pink fresh berries are selected, then air-dried on sieves for just one to two days. They have a mild, pleasantly sweet, fruity flavor with a slightly spicy finish.

Pain d'Épices
Pain d’épices, or “spiced bread” in French, is a specialty of Dijon in France’s Burgundy region. The 18th-century bread recipe called for wheat flour, honey and savory spices. As spices became increasingly scarce, the spiced bread evolved toward sweet pastry. Our Pain d’Épices spice mix hews to older recipes where cinnamon is the dominant flavor. We add anise seed and nutmeg to round the flavor profile, with a hint of allspice and coriander in the background.